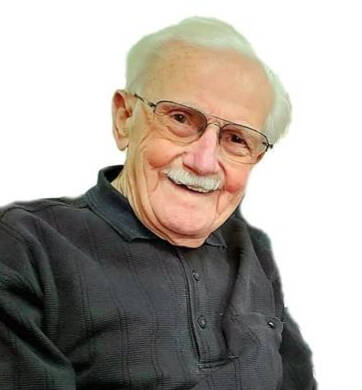 Edward A. “Ed” Stoepler, 100, of Greenfield, passed away peacefully with his daughters by his side at Springhurst Health Campus on Wednesday, November 30, 2022.

He was born on September 3, 1922 to the late Edward A. Stoepler Sr. and Theresa (Kistner) Stoepler in Indianapolis, Indiana. He married the late Dolores (Stafford) Stoepler in May 1954.

Ed graduated from Arsenal Technical High School in 1940 and moved to Chicago where he was employed as a cartographer with Rand McNally Company. He returned to Indianapolis to work in civil service at an aircraft engine and parts supply depot managed by the U.S. Air Force. During the post-war years, Ed worked in Evansville for an auto dealership. He later returned to Indianapolis and ultimately settled in Greenfield, selling cars at Christian Chevrolet. During this time, Ed sold his personal ‘49 Ford five-window coupe to a young man who had a sister as his “bank”. When Ed discovered the “bank” was his co-worker, Dolores, it was the beginning of a long and loving 55 years of marriage.

Ed was employed by Shelby Petroleum for 43 years as manager of the Wholesale and Bulk Plant. After retirement he enjoyed a variety of part time jobs. His last job was as a Family Assistant at Erlewein Mortuary.

Ed never knew a stranger, never walked away from anyone who needed him and was always ready with a helping hand and a listening ear. He was known for his kindness and compassion for others. Ed routinely found the positives in people and never complained regardless of circumstances.

Ed was a loyal and serving member of the Greenfield Lions Club and a member of St. Michael Catholic Church. He served as Lions Club president and most recently as the treasurer. He enjoyed camping, cookouts, and racing more than anything else. The Indianapolis 500, the Brickyard 400, and Michigan races were annual destinations for him and his racing friends and family. Race cars and his trip to Alaska were favorite conversation topics.

In addition to his parents and wife, Ed was preceded in death by his sister, Dorothy, and her husband, Hamilton Williams, as well as his sister-in-law, Jean Denney. Those left to cherish his memory include his brothers-in-law, Don (Janice) Stafford and Bob Denney; his three children: Greg (Mary Ann) Heinz, Donna (Bill) Brookfield, and DeAnne (John) Maxwell. In addition, he is survived by his six grandchildren: Jennifer (Mark) Cann, Brian (fiancé Carrie) Heinz, Jennifer (Brian) Mouser, Joe (Denise) Brookfield, Kit Maxwell and Sarah Maxwell. He was blessed with fifteen great grandchildren: Kevin, Ryan, Ali, Abbey, Faith, Katie, Thomas, Andrew, Brian Jr., Maria, Zackary, Rudy, William, Cylas, and Emery along with many nieces and nephews.

Ed’s family would like to thank his caregivers over the last few months at Hancock Regional Hospital, AMG Specialty Hospital, Springhurst Health Campus, and Heart to Heart Hospice – their teams treated him with compassion and provided attentive care. Ed would properly give them his characteristic grin and “thank you” whenever he was able. Additionally, the family are grateful for Ed’s extended circle of friends for their constant support. Ed would also like to acknowledge Sarah Jane Patton for her important genealogical contributions.

Visitation will be on Tuesday, December 6, 2022, from 4:00 p.m. to 7:00 p.m. at Erlewein Mortuary & Crematory, 1484 West US Hwy 40 in Greenfield with a Rosary Service at 4:00 pm. A Mass of Christian Burial will follow at St. Michael Catholic Church, 519 Jefferson Blvd in Greenfield on Wednesday, December 7, 2022, at 11:00 am with Visitation the hour before. In lieu of flowers, memorial contributions are suggested to St. Michael Catholic Church or Heart to Heart Hospice. Please visit www.erleweinmortuary.com to share a favorite memory or to sign the online registry.