HANCOCK COUNTY — Ken Eckstein was a teenager when he began his career in recreational vehicles, washing trailers for $2 an hour for an Indianapolis company.

Over the decades that followed, he’s gone from a wash bay to an office overlooking a showroom filled with gleaming motor homes.

The owner and founder of Mount Comfort RV on Hancock County’s west side just handed over the keys to his 10,000th customer. He credits the milestone to a background of valuable experience, growing his company one step at a time, and a resilient industry capable of overcoming economic challenges. 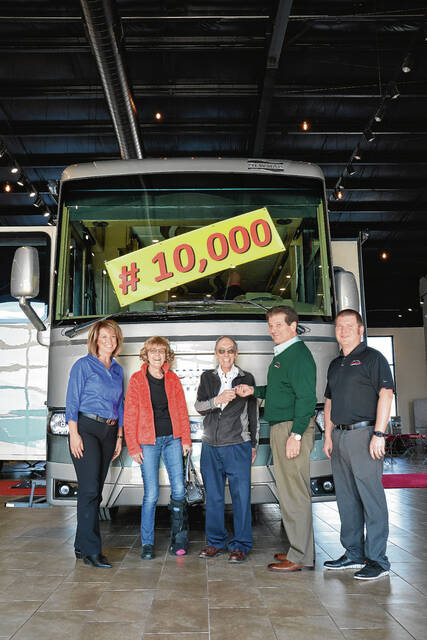 At Indianapolis-based Duffin’s Trailer Sales, Eckstein eventually went from washing trailers to working his way through college as an RV technician. He graduated from Indiana University with a degree in economics.

Eckstein spent the beginning of his career working for several companies in central Indiana’s RV industry. By the early 2000s, a company had bought Duffin’s and moved the dealership to western Hancock County. In 2006, Eckstein bought that company’s assets and established Mount Comfort RV.

The business started with 18 employees, seven of whom remain, and now has over 60. On 17 acres at the southeast corner of Interstate 70 and Mt. Comfort Road, the company has more than 400 new and used RVs and a 10,000-square-foot showroom. It also has a rental division, parts and accessories department and an 18-bay service facility, including a full RV paint and body shop.

Mount Comfort RV has been named among the country’s top 50 dealers by “RV Business” for 10 consecutive years.

Eckstein said the company never set out with specific plans to be one of the top dealers in the country, one of the biggest in Indiana or that it’d do tens of millions of dollars a year in business.

“No long-term plan, no long-term goals, really just putting one foot in front of the other and taking those steps as they came,” he said.

By the time Mount Comfort RV was established, he had already been in the industry for over 30 years.

He recalled the biggest RV advertiser in the state at the time was located in Richmond, while the second biggest was in Greenwood.

“And of course to get one place to the other they had to go past me,” he said. “So until those stores got bought out, I just sat here and really lived off of their discards, the people they couldn’t sell.”

The Great Recession that started in 2008 may have wreaked havoc on many industries, including recreational vehicles, but Mount Comfort RV actually made money in those years.

The company also had fortunate experiences over the years with certain products, like a retro trailer that made up over 100 sales in a 12-month period.

“We caught lightning in a bottle a couple of times,” Eckstein said. “That was a quantum leap forward, but we guessed the market right.”

He also credited a lot of the company’s success to getting in on social media early.

The RV industry is able to survive challenges like hikes to gas prices and interest rates, other economic obstacles and the COVID-19 pandemic because of the experiences it provides, Eckstein said.

“You’re selling aluminum and steel and glass and iron, but what you really want the people to have is the dreams and the family togetherness,” he said. “We’re selling the open road, we’re selling bike paths and blue skies, we’re selling campfires and s’mores.”

As part of the dealership’s observation of its 10,000th camper delivery, it will donate $10,000 to local charities, according to Eckstein.