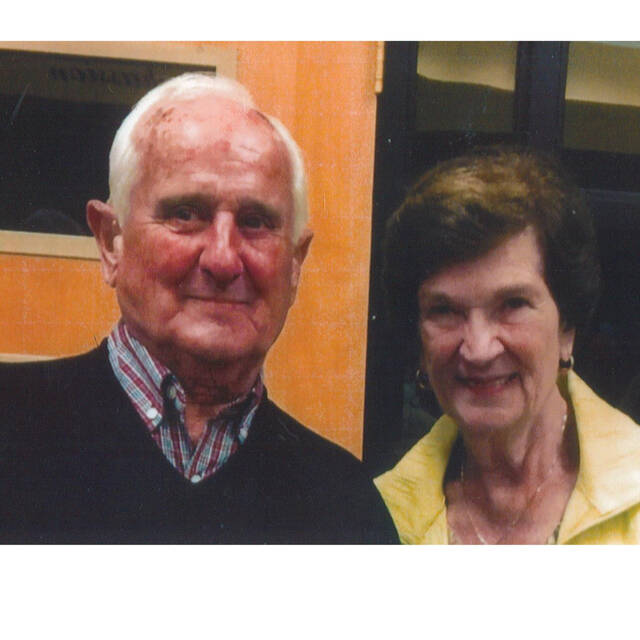 Patricia Ellen (Kelly) McQueeney, age 85, of Greenfield, Indiana, was surrounded by family when she joined her Savior, Jesus Christ, and was reunited with her beloved husband, Jack, in Heaven on Wednesday, January 12, 2022. She was born on December 16, 1936, to Patrick and Olive (Hubert) Kelly in Tell City, Indiana.

Pat graduated from Maxwell High School in 1954 and attended Butler University. She was a member of the Psi Iota Xi Sorority for 21 years and attended the Catholic church her entire life. Pat was looking forward to celebrating her 62nd wedding anniversary to the love of her life and high school sweetheart, Jack McQueeney, on January 30.

After 30 years in the Warren Township School system where she was an Administrative Assistant to the Principal, Pat retired in 2009. She was known for her baking skills and could often be found delivering delicious baked goods to friends and acquaintances to let them know how much she cared. She loved watching sports and kept her own scorebook and stats at all of her sons’ and grandchildren’s activities. She was a master stain-remover who was always armed with a wet washcloth and never lost a fight with a stain. Pat may be remembered most for making the world’s best chocolate chip cookies. She adored her grandchildren. Being a bammaw was her greatest privilege and joy. She had a servant’s heart and even in her final hours, she was more concerned about her family than herself.

Pat’s loss will be felt deeply by the entire community. In lieu of flowers, please donate to Peyton’s Promise, Inc at peytonspromiseinc.org or the Kenneth Butler Memorial Soup Kitchen. At Pat’s request, there will be no funeral service. A celebration of life will be announced on a later date. Arrangements are being handled by Erlewein Mortuary &Crematory in Greenfield.

Pat asked us to share her wishes that people love their families, practice their faith, and love God in all that they do daily.