INDIANAPOLIS – Like many local officials, Hancock County commissioner Bill Spalding pays close attention to the State of the State address. Unlike many of them, Spalding watched the event live as part of the team protecting Indiana Senate President Rod Bray.

As a sergeant in the Indiana State Police, Spalding’s duties while the General Assembly is in session include providing security for the Senate president pro tempore. That means he’s in the back of the House chamber as the governor gives his annual update.

“It is a different perspective to see it live rather than on the TV,” Spalding said.

Spalding, a Republican, said he was impressed with Holcomb’s speech this year and appreciated the governor’s emphasis on grants and other programs that are sending funding to local governments for their own projects.

“I thought overall it was a good representation of what’s going on in Indiana right now,” he said.

In his speech, delivered to the Indiana General Assembly on Tuesday, Jan. 11, Holcomb emphasized the positives about the state’s current position, saying Hoosiers have plenty of reasons to look forward to the future with optimism.

“Even as we’re contending with the challenges of a global pandemic, we’re simultaneously strengthening our economy, reskilling our workforce, building out our infrastructure, and enhancing our quality of life. And now, because we’re ready and able, we’re revitalizing and connecting our communities across the state like never before,” he said.

Holcomb highlighted the state’s budget surplus, which enabled the state government to invest more money in education and to return a tax refund to citizens. He praised the state’s GDP growth, low unemployment rate, and population growth, noting that a report from U-Haul showed Indiana placed sixth in the nation among states people are moving to.

He also highlighted business growth, saying 29 companies moved their headquarters to Indiana in 2021.

Rep. Bob Cherry, R-Greenfield, said he agreed with the positive message Holcomb shared in his speech. He said the Indiana state government has accomplished “a lot of good things” in the past few years.

“There’s more work to be done, but we’re kind of leading the Midwest right now and one of the best in the country,” he said. 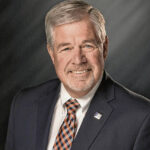 While Holcomb was positive overall, he also spoke about areas that need improvement, including mental health and substance use treatment. The governor said Indiana’s problems with fentanyl abuse and other drugs have only gotten worse during the pandemic.

The Indiana Public Health Commission, he said, will submit a report this summer with recommendations for the 2023 budget session on how the state’s public health systems can be improved.

Holcomb also acknowledged the impact of the COVID-19 pandemic on the state, pointing out that the number of Hoosiers who have died of the coronavirus is greater than the population of cities like Crawfordsville and Jasper.

He thanked health care workers, school staff and Health Department officials and said he wanted to implore or “even beg” people who have not been vaccinated against COVID-19 to protect public safety by getting the shots.

“Hoosiers have proven throughout the pandemic that they are resilient and have a spirit that can’t be broken,” Holcomb said. “It’s the foundation of who we are and what we strive to be and together we can build an even better Indiana.”

Cherry said he still believes it is an individual choice whether or not to get the COVID-19 vaccine, but understands why Holcomb placed such a strong emphasis on the message.

“You have to talk about it,” Cherry said. “…Nineteen thousand is too many. One is too many.”

House Democratic leader Phil GiaQuinta said in a statement released Wednesday that he appreciated many aspects of Holcomb’s speech.

“Governor Holcomb’s address was a stark contrast from his colleagues in the legislature,” GiaQuinta, D-Fort Wayne, said. “I appreciate his willingness to focus on issues important to Hoosiers, not political games and divisive, hyper-partisan agendas.”

GiaQuinta added that he believes the state should be making critical financial investments now to help improve Indiana’s quality-of-life metrics, not waiting another year for the next budget session of the legislature.

Indiana Democratic Party chair Mike Schmuhl said in a statement that the state’s economic success in the past year should be attributed not to Holcomb’s policies, but to federal investments under President Joe Biden that have funded raises for teachers, the state’s READI grant program, and more.

“Hoosiers everywhere are also hurting tonight, because they are experiencing the consequences of the Indiana Republicans’ long-game effort to discredit COVID-19. Between the constant dismissal of the life-saving vaccine to questioning the state’s figures on cases, hospitalizations, and even deaths — Republicans have shown that their effort to score political points comes before the public health of Hoosiers,” Schmuhl said.