HANCOCK COUNTY — Three new full-time sheriff’s deputies will soon be on the roads after being sworn in by Sheriff Brad Burkhart. 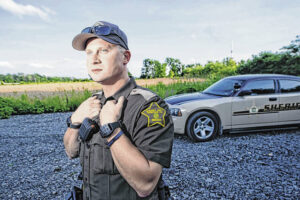 Michael Hurst, a former reserve deputy with the sheriff’s department, has joined the department as a full-time deputy.

As a reserve deputy, Hurst was always eager to participate in any events the department held to help the community, said Capt. Robert Harris, public information officer for the sheriff’s department.

“Hurst participated in Shop with a Deputy, Community Night and other events while also working patrol shifts,” Harris said. “His wife even helped serve as a role-player for our department Standardized Field Sobriety Test training.”

As a former reserve deputy, Hurst has already completed his field training with the department and will initially be working the day shift. However, his training is not complete. He will attend the Indiana Law Enforcement Academy in January 2022.

Deputy Joshua Miller also has law enforcement experience, having most recently worked for the Shirley Police Department as an officer since 2016. He was a lieutenant on that force and held numerous certifications, including instructor, field training officer and evidence technician. 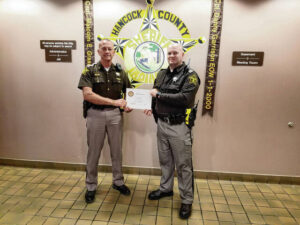 Sheriff Brad Burkhart welcomes Josh Miller a new deputy. Miller comes to the sheriff’s department after a stint at the Shirley Police Department.

Miller, 39, will continue to live in Shirley with his wife and two children. He is currently completing his field training with the department and will soon be released to work a patrol shift in the county as a full-time deputy.

Deputy Shaun Ray currently lives in Indianapolis. He and his wife have five children. While he doesn’t have any law enforcement experience, Ray previously served over 10 years in the Army as both an enlisted member and an officer. 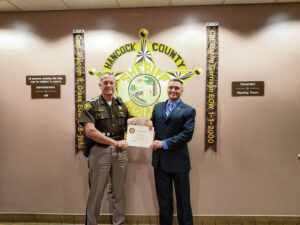 Sheriff Brad Burkhart welcomes Deputy Shaun Ray. Ray will get some training through the Indiana Law Enforcement Academy as well as local training before beginning patrols.

After his military service, Ray worked at a car dealership but told sheriff’s department officials he felt a calling for law enforcement that led him to complete a bachelor’s degree in criminal justice. He even took a cut in salary to leave the business field to work for the sheriff’s department.

“Deputy Ray is currently working in the jail to gain some experience while waiting on his uniforms and equipment to arrive,” Harris said. “He will begin his field training on patrol very soon.”

Harris noted the department will be hiring three additional deputies in January, two of which are current jail officers who already work for the department. The third hire has yet to be decided. The moves are part of an expansion of staffing at the sheriff’s department.