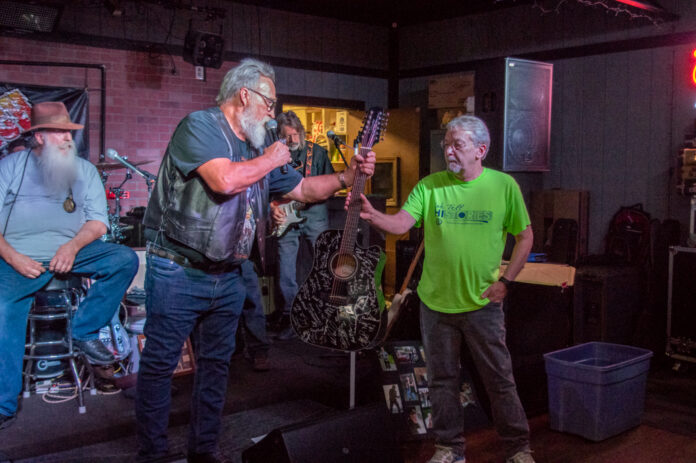 GREENFIELD — A black 12-string guitar signed by nearly four dozen Hancock County musicians has made its mark in history.

On Sept. 16, the guitar was presented to the Hancock County Historical Society at a memorial concert at Snappers Bar & Grill in Greenfield.

The concert was in memory of Greg Hall, a lifelong county resident who made a living sending music out into the world.

The longtime musician was widely known as one of the best luthiers — or guitar makers — in the country, drawing the likes of Bob Seeger, Ted Nugent and John Mellencamp, who would call upon him to build guitars in the modest shop outside his Hancock County home.

Although Hall didn’t make the guitar that was donated to the historical society, he was able to sign it before passing away on Sept. 7, 2021.

While the plan to sign and donate the guitar was already underway, the project turned into a way for fellow musicians to honor Hall after his death.

“Greg and I used to be in bands together and went out on the road together several times. He was pretty much my best friend,” said Don Donner, who played with Hall in two different bands over the past 40 years.

In addition to being a formidable guitarist, “Greg was the best luthier in the state, and in my estimation in the entire country,” said Donner, who stepped in for Hall on Friday night when his old band, Stagecoach, took the stage.

Hall was a founding member of Stagecoach, a country and southern rock band formed back in 1980 by Jerry Crosby of Greenfield, who served as frontman until the band retired in 2021.

The band came out of retirement last weekend to honor Hall, who was beloved by his bandmates and friends.

“We were like brothers really. We rode Harleys and did family things together. He was a great musician and a great friend,” said Crosby, who briefly attended Greenfield High School with Hall.

As far as luthiers go, “he was one of the best around. He was the only one in the state of Indiana that was qualified to work on Gibson, Martin and Fender guitars,” said Crosby, who met a number of big-name musicians by hanging out at Hall’s shop, or being invited along to concerts where they’d mingle with stars backstage.

“If you’d be in his shop you’d never know who was going to walk through the door,” he said.

Both Crosby and Donner know Hall would have been proud to see the dozens of musicians gathered in his honor at Snappers last Friday night.

The concert started out with a performance by Hall’s old band, Stagecoach. Then Crosby’s new band — Cuff County — took the stage. After that, a mixed bag of musicians took the stage for a collective jam session.

“The place was packed. It was a good time,” said Crosby, who said one former band member flew in from Florida to honor Hall.

Roughly 46 musicians signed the guitar that was presented to the historical society. Stagecoach member Bob Riley bought the guitar from the Greenfield Music shop, owned by fellow musician Tony Seiler, with the sole purpose of capturing the names of Hancock County musicians who have spent their lives making music.

Crosby is thankful others recognize the need to preserve and display the names of local musicians for future generations.

Michael Kester, president and curator for the Hancock County Historical Society, was presented with the guitar at Friday night’s concert. It will soon take up residence in the Chapel in the Park Museum in Greenfield, taking its place in history alongside Civil War artifacts and other mementos that reflect Hancock County’s history.

“Due to limited space we try to restrict donations to only those things that pertain to Hancock County, and this guitar was perfect for us. It captures all these names of Hancock County musicians, and each one has a story,” said Kester.

He’s is now working with Crosby and Riley to create a list of each of the musicians featured on the guitar, along with bios and photos of each one, to encapsulate the story of the local musicians of this era.

Kester said the museum has received an increasing number of donations over the past two years, as people have been cleaning out their closets and attics since COVID hit, but the signed guitar is the cream of the crop.

“This guitar was perfect for us. It ranks among the top five donations that have come in the door,” he said.

The historical society’s Chapel in the Park Museum and the Old Log Jail Museum, at the corner of Apple and Main Streets, are open from noon to 5 p.m. Saturdays and Sundays, April through October. Group tours are also available by appointment.

Behind the Booths: Vendors prepare their wares for Riley Festival