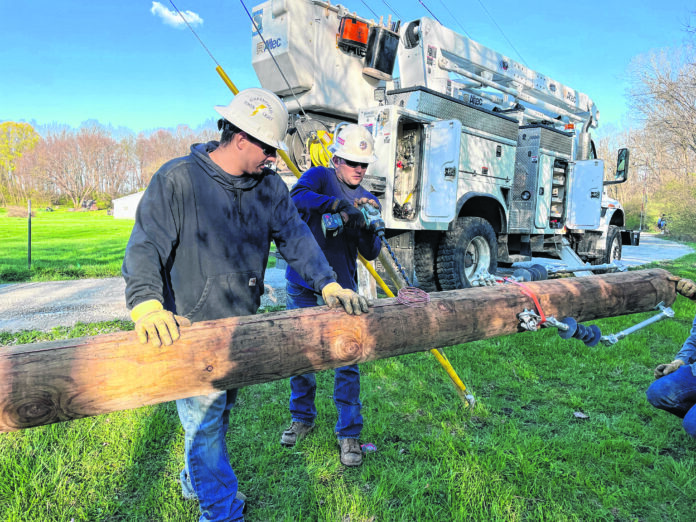 GREENFIELD — Cody Richey pressed a lever to ease the bucket he was standing in closer to the power line — with 7,200 volts of electricity coursing through it — and prepared to get to work.

He and three other linemen from Greenfield Power & Light spent Friday morning replacing a 35-foot-tall wooden utility pole on the far east end of Osage Street.

Dancing with danger is all in a day’s work for guys like them, who make a living often perched 40 or 50 feet in the air, making sure electricity is constantly flowing throughout the community they serve.

April 18 is National Lineman Appreciation Day, which Congress designated the year after after Hurricane Sandy ravaged the East Coast and beyond in 2012, from Canada to the Caribbean.

Electrical linemen are considered to be among the most important storm recovery workers because other recovery operations require electricity to work at full capacity.

Working with thousands of volts of electricity while dangling from a bucket or utility pole is among the riskiest jobs out there.

“Not everybody can do this job. It takes a rare breed,” said Scott Yost, who oversees the 11-man crew of linemen at Greenfield Power & Light.

“Day to day, those guys are messing with some serious voltage. You don’t get a second chance. You need to be very careful and safe about what you do,” he said.

Greenfield Power & Light is among the three electric utilities servicing Hancock County, along with Duke Energy and NineStar Connect.

While they may work for different companies, Yost said all linemen share a sense of camaraderie and a mutual respect for the job.

“It’s a brotherhood,” said Yost, 46, who joined Greenfield Power & Light in 1996, the year after he graduated from high school.

He quickly came to think of his coworkers as family.

“Oftentimes we’re together more than we are with our own families, between regular work weeks and call-outs if we have storms,” said Yost, who exudes pride in the staff he oversees.

“I have the utmost respect for these guys. I’m proud of them. They’re always willing, able and available,” he said. “I know I can rely on them, and so does the community. We get graded every year through the American Public Power Association, and our reliability is outstanding.”

Jordan Osswald, who joined Greenfield Power & Light as an apprentice in 2018, said it’s a great feeling to show up just after a storm and restore power to people who rely on it.

“If someone is on oxygen, their life could depend on how quickly you can get the job done. Stuff like that really makes you feel good about what you do,” said Osswald, 29,

No matter the job, Yost said safety is always the top priority, which includes looking out for one another when working the line.

“The guys are great about watching each other’s backs because of all the reaching and moving around, everybody has to go watch what’s going on. The guys on the ground are always looking up to see if they can see something the guys up top can’t see. You’ve got to look out for each other,” he said.

The weather can also be brutal, he said.

His most challenging night was three or four winters ago, when he was called out to repair a line when the wind chill was between 20 and 30 degrees below zero.

“I had to go out in the bucket (truck) wearing rubber safety gloves, which aren’t insulated, and my hands couldn’t take it for very long. Thankfully the job didn’t take very long,” said Richey.

“I like the fact I get to work outside, but the inclement weather can be terrible. But it’s always fulfilling work after the job is done.”

Osswald finds the same satisfaction in being a lineman, which he said is a perfect job for him.

“I’m a hands-on type of guy, and this is definitely hands-on, and every job is different. You don’t know what you’re going to be doing day by day,” he said.

Dangerous conditions are just part of the job, but extensive training assures that linemen are well prepared to handle the high-voltage electricity coursing through the lines.

“When I went to line school, the first thing they told us is respect it, don’t be scared of it. If you respect it, it takes the fear out of it,” said Osswald. “Situations like car wrecks where you’re dealing with downed power lines can be pretty scary, but if you take your time and think things through, it all goes pretty well.”

Osswald said working as a lineman is statistically more dangerous than working as a firefighter or police officer, a fact he and his fellow linemen jokingly share with their friends on the city’s police and fire departments. But, he said, they all work together to serve the community.

Richey said it’s rewarding to have business or homeowners come outside to thank him for restoring their power.

“It’s especially important to people who are working from home,” he said.

“That’s been a big change, having so many more people work at home over the past couple of years, so it’s important to keep their power on,” said Richey, 32, who first joined the local utility as a summer helper in college.

To not inconvenience power customers, Richey said lineman are taught to work on active lines without shutting down power to the home. “We call it ‘working it hot,’ which is done so people can have their power on while we’re doing a job. It can be dangerous, so we have to be highly aware and alert at all times,” he said.

Once or twice a year, the local linemen get to have a little fun as they compete with their peers at various Lineman Rodeos, family-friendly events at which they test out their skills in a competitive format.

Linemen take turns racing to the top of poles and doing procedures, for which they’re scored on speed and safety. While the winners get bragging rights, Yost said all the competitors go home with a renewed energy and enhanced skills.

“You climb up and down that pole so many times in training and in competition, and you’re definitely going to improve your skills,” he said.