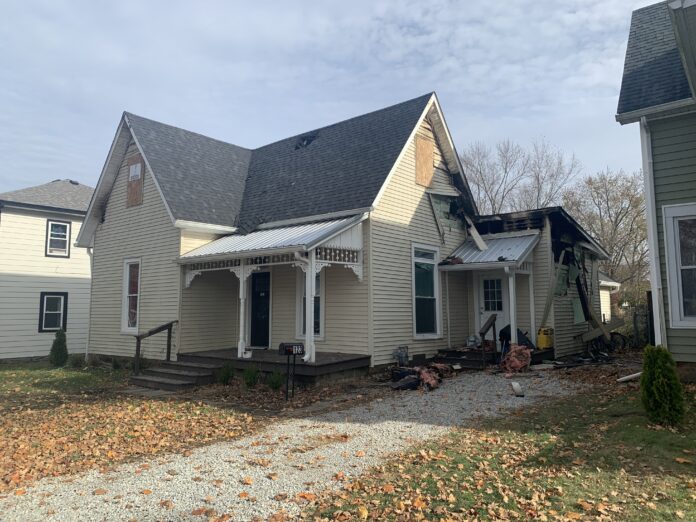 GREENFIELD — Six residents safely escaped a fire in a house Tuesday night, where work that had been done to the structure over the years posed challenges for firefighters.

Firefighters responded to the call at a two-story house in the 100 block of North Spring Street at about 10 p.m. on Nov. 23. Greenfield Fire Chief Brian Lott said the call initially came in as an investigation, prompting the fire department to only send a ladder company and an engine company.

“Rolling up on it, they marked it on arrival a working fire,” Lott said. “It already had flames flying through the eaves in the attic. So we kind of got a late jump on it, to add all the other manpower to the run.”

The homeowner and five renters made it out without any injuries, Lott said.

“Some of these old houses in Greenfield are challenging because they’ve been remodeled two or three times,” he said, adding the one on Spring Street had two false ceilings, creating a lot of voids for flames to travel through.

Lott also said plywood was used during a remodel on the house’s second floor rather than drywall.

“It made things a little more challenging,” he said, as plywood is more difficult to pull down to get to fire within walls.

Lott said firefighters got the blaze under control within about an hour and a half and remained on scene until 2 a.m. Wednesday handling hot spots.

An investigation into the cause of the fire will begin Saturday, Lott said, adding it appears to have started high up on the house, likely in a second-floor wall or attic space.

Fire damage was mostly contained to void spaces on the second floor, he said.

“It doesn’t look too bad from the front, but if you look from the back, there’s a couple of rooms that burned out pretty well,” he said, adding the first floor has a lot of water damage. “They’re more than likely going to have to take the roof off of it and part of the second floor in order to rebuild.”