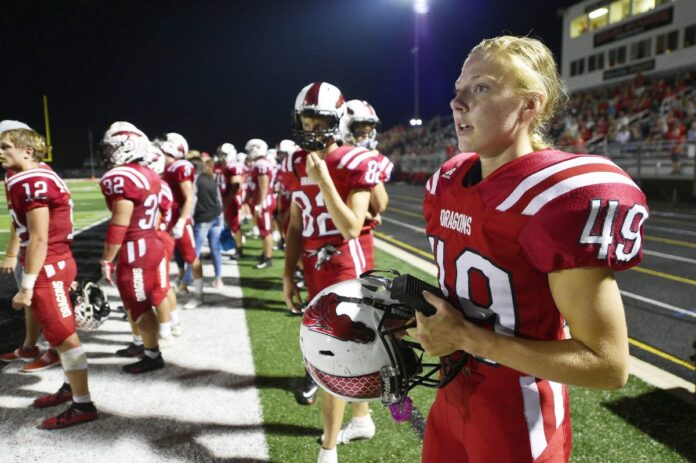 This fall, she’s did both for the top-ranked Class 5A New Palestine Dragons.

“I never thought I was going to be a kicker for a football team,” Reid laughed as she reflected. “The opportunity was there, and I was like might as well go for it senior year.”

Her path to becoming the Dragons’ first female varsity football player was more happenstance than intentional.

Enrolled in New Palestine’s advanced weight training course as a junior, Reid went out and kicked for fun last year inside Kelso Stadium during class and immediately caught the eye of head coach Kyle Ralph, who is also the school’s strength and conditioning instructor.

Reid’s reputation for being an all-around athlete was already well known at New Palestine as a state-qualifying track and field standout, a former soccer starter and a key cog on the girls basketball team.

Football never crossed her mind, though Ralph and Reid joked about the idea initially until there was a pressing need this past summer.

Reid was coming off an ACL injury her sophomore season that she suffered while playing soccer and as a junior she admittedly recovered fully after the basketball season ended.

She was the lead leg on the 4×400-medley relay team last spring that finished seventh at state and was ninth individually in the 400-meter dash with a school-record time of 56.075 seconds.

Committed to Indiana Wesleyan for both basketball and track, Reid didn’t have much more to prove, and then her friend and classmate, placekicker Alex Kropp endured his own adversity.

Kropp injured his right quadriceps in the summer in his kicking leg, which put the Dragons football team in a bind. Senior punter Eric Roudebush watched his workload double, while Kropp was forced to miss the regular season, and the already light football roster’s depth grew thinner.

The situation led Ralph to seek out Reid. After getting her parents, Dale and Tonya, on board, it became a reality and historic.

“I have many Dragon uniforms now,” Reid joked. “I didn’t think anything about it. I was just doing this to help out the team.

“As I started getting into it and got more feedback from it, I realized how much I’ve been doing and was making a way for other people and opportunities.”

She scored her first varsity point on her first try with an extra point against Pendleton Heights on Sept. 20 as the Dragons rolled to a 47-6 win.

“My first one was my best one ever probably because my adrenaline was through the roof. Then, I kicked another one and I kind of shanked it,” Reid said. “But that’s ok because I made the first one.”

Along with Roudebush, Reid handled extra-point duties through the Dragons’ 13-0 run this season. She is 24-for-29 in her attempts and has converted a 35-yard field goal at practice — once.

Opening the door for future female players was a bonus, though the Dragons see her as just another player, one who came to the rescue in a pinch.

“She’s been huge. We lost Kropp right before the season started, and that put a lot of additional workload on Eric Roudebush’s plate. He’s our punter. Now, he has to be our kickoff guy and extra points. Having Jordan available to come in and take some of that workload off of him and keep his leg healthy was big for us,” special teams coordinator Wes Anderson said.

“She’s a natural and incredibly talented. She’s just one of those athletes that you can probably teach to do about anything and she’ll do it well.”

If the Dragons can build a large enough lead tonight against Valparaiso during the 5A state championship game at Lucas Oil Stadium, she could add to her legacy.

In IHSAA state finals history only one other female player has recorded a point in Samantha Eastes of Carmel, who kicked a PAT with 0:17 left in the 6A championship game against Ben Davis in 2014.

What’s most important to Reid, however, is winning.

“I’m just there to cheer in the boys. I could careless if I get one or not. I’m just here for a good time,” Reid humbly remarked. “I’m just really proud of them. They make it fun.”

Cougars led by trio of veterans