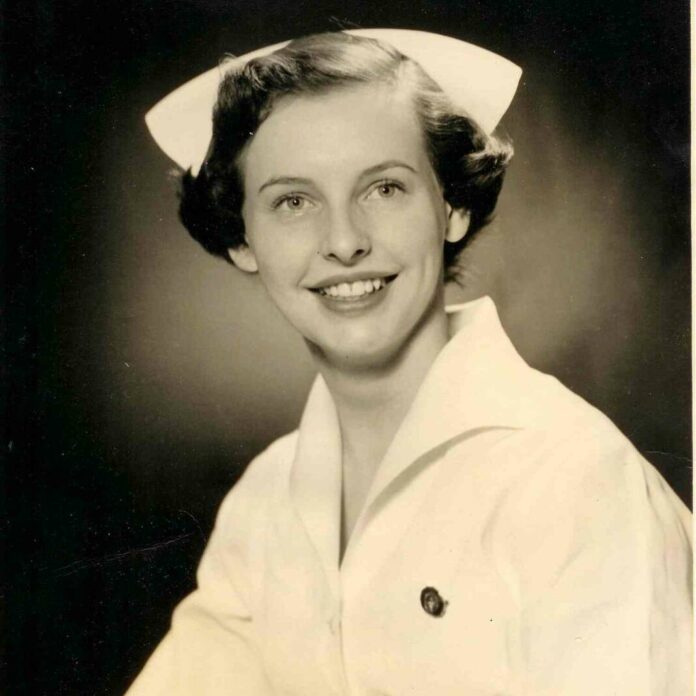 Joy Jean Forrest was born Joy Jean Cloud to Harold and Millie Cloud on February 15, 1929. Like many babies during this time, she was delivered at home. The fourth of five children, she grew up in a mostly rural community in east central Indiana surrounded by her three older brothers (Maurice, Charles and Allen) during turbulent times.

In fact, the day before her arrival in this world, seven men were murdered by mobster Al Capone during the infamous “St. Valentine’s Day massacre “. The following October would bring “Black Tuesday”, economic collapse and the onset of the Great Depression that would define the decade of the 1930’s.

Hard times forced her father to be away from home much of the time looking for work while her mother gave birth to another daughter, Bette. Mille worked hard making a decent home for her family. Joy learned early the valuable lessons of hard work and perseverance dictated by the times.

Still a young girl, she watched, waited, and worried as her three older brothers left for Europe and the Pacific to fight during World War Two. She knew that men were dying in a cause that would forever save and change the world. Like everyone else, she felt relief, joy, and gratitude as her brothers were fortunate enough to return home safe and sound.

As life returned to normal, Joy’s natural talent for sketching and painting led her to a dream of becoming an artist. After high school she would attend and graduate from nursing school at Ball Memorial Hospital in Muncie, the predecessor of Ball State University School of Nursing.

Throughout she never lost her her love of art. She would continue to draw, sketch and paint throughout her life. It was the early 1950’s and after graduating she was working as a nurse when she met and married James Miranda Forrest September 20, 1952.

After their first child (Marianne) was born, the young family moved to California where two additional children were born ( Sandra Jean and James Doug). Alas , the 1960’s found the couple divorced.

Joy and the children returned to Indiana and Jim remained in California. Joy and the kids settled in the town of Greenfield. There she reared her three children and shepherded them through school. During the 1960’s and 1970’s it wasn’t always easy being a single mother. She did the best she could with three children while working full time as a nurse. She worked for several years at Hancock Memorial Hospital where she cared for the special needs of geriatric patients.

After the kids were all grown and out of the house, she continued to work and later retired. Patients and staff would describe her as a professional and conscientious nurse. Above all else, they would best remember her as a caring and compassionate person. As she proceeded into her later years she would develop memory and cognitive loss that would follow her through to her passing.

On Wednesday, August 31, 2022, many of my family on my Mom’s side traded myriad phone calls to report that my Mom had died peacefully in Hospice care in Indianapolis. She was 93.

She is predeceased by her parents, my beloved Grandparents, who lived into their late 80’s and middle 90’s and she will leave her sister, my Aunt Bette, alone out of five siblings.

Of course, she was prepared with end of life wishes: no service and a burial in Park Cemetery in Greenfield, Indiana.

My Mom is a child of the Depression, World War II, and was the first woman in her immediate family to graduate from college with a degree in Registered Nursing. She wanted to study Art but her family didn’t think it would make a living so she became an RN. I believe she married the only man she ever kissed and although she did her maternal duty, it was never her own wish to be what the times, her parents, or society wanted. She loved her independence, her point of view, and if asked would describe her divorce in a way that made you think it was recent although it happened in 1966.

She was a good daughter, she didn’t swear, she struggled with all three of her children and she had a majestic, surreal, and inclusive spiritual life, like her Dad. Her artistic skills and eye never left her and I credit her with my ability to see real beauty and presence. All my gratitude now to the work of Hospice.

My Mom never cultivated close friendships and kept her own company quite happily. I value my friendships enormously for which I am grateful today and always.

She was a daughter, wife, mother, coworker and friend survived by her sister, three children, five grandchildren and two great grandchildren.