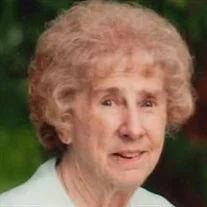 Maxine (Edwards) Carson, 97, a 75 year resident of Carthage, passed away Thursday, July 28, 2022 at Demaree Crossing in Greenwood. She was born on January 3, 1925 in Hamilton County, IN a daughter of the late Fletcher and Mae (Kimberlin) Edwards.

Maxine attended Eden High School prior to graduating from Carthage High School in the Class of 1943. She married the love of her life, Carl E. Carson Jr. on February 15, 1946 and they were married for 72 years until Carl’s passing.

Maxine had been employed over the years as a bookkeeper at Container Corporation, State Bank of Carthage and Winters Accounting, all located in Carthage. She enjoyed traveling while visiting all 50 states, Canada, Mexico, and the Holy Lands in Israel. Maxine was a 75 year member of the congregation from Carthage Community Church.

In addition to her parents, Maxine was preceded in death by her husband, Carl E. Carson Jr; sister, Velma Leisure; brothers, Norman, Carl and Paul Edwards.

Visitation will be Monday, August 1, 2022 from 4:00pm-8:00pm at Hinsey-Brown Funeral Service in Knightstown. Services will be 11:00am Tuesday at the funeral home with burial to follow at Glen Cove Cemetery. You may express condolences or share memories of Maxine at www.hinsey-brown.com.