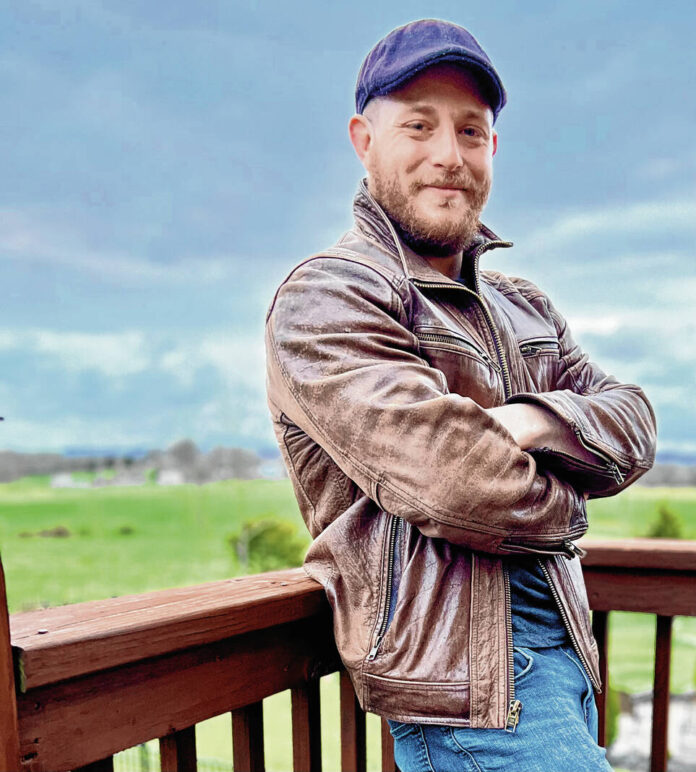 Hancock County native Evan Myers recently published his first novel “Dusk on the Western Range” April 26. Myers graduated from Greenfield-Central High School in 2012; he’s worked as a public affairs specialist and photojournalist with the Indiana Army National Guard, as a journalist for the Daily Reporter, and in communications with an organization called USA Cares in Louisville. He is currently a high school English teacher and wrestling coach at Jefferson High School near Louisville. Here’s a look at his passion for writing and his plans for the future.

Daily Reporter: How long have you been writing?

Evan Myers: Besides my work as a journalist, I’ve also been writing fiction as a hobby for as long as I can remember. Throughout high school and college, I was writing short stories. I love writing dialogue, so I’ve also written several stage plays. When I was a senior at G-CHS, my one-act play “Knight School” was produced by the G-CHS drama club. When I was a student at Purdue, one of my works, “You Don’t Work Here,” won the Brian Mexicott Award for Best Original Drama at the annual Purdue Literary Awards. “Dusk on the Western Range” is my first novel, so tackling the challenge of a new medium was an adventure of its own!

DR: What sparked your interest in writing?

EM: When I was a kid, I used to think that a blank piece of paper was the most exciting thing in the world. Any chance that I had to invent a new story, new characters, a new world, felt like I was going on an adventure. All I needed was a pen and my imagination, and I was free to create.

DR: What was the inspiration for your book?

EM: “Dusk on the Western Range,” is a Post-apocalyptic Western. After reading, one of my coworkers described it as “Divergent” meets “The Good, the Bad, and the Ugly,” which was quite a humbling compliment. The events of “Dusk on the Western Range” take place in a world where a mysterious biological attack killed 75% of the American population, nearly overnight. My story picks up 30 years after the attack, following two characters as they embark on an adventure across the American West. Here’s the funny part; I came up with the idea for “Dusk on the Western Range” all the way back in 2017, long before anyone had ever even heard of Covid-19. But I never bothered to bunker down and write it all down until a real-life pandemic hit! Ironic, I know.

DR: Do you have plans for a book signing locally?

DR: What comes next for you and your writing career?

EM: I definitely plan to write and publish more action-adventure novels in the future. Fiction writing has become an excellent side job for me. Being an English teacher by day and an author by night is a great career combo. Sometimes I get nervous about having writers’ block, or not being able to come up with more material. I usually find comfort in the words of Ernest Hemingway: “You have always written before, and you will write now. All you have to do is write one true sentence. Write the truest sentence you know.”

Hope for Living: We are stronger when in community