GREENFIELD — KidsPlay children’s theater returns to the stage this weekend with a collection of 10-minute comedies.

“Take Ten” will showcase a cast of 15 young actors across six short plays April 23-24 at the H.J. Ricks Centre for the Arts in downtown Greenfield. It’s the first time in two years the community children’s theater will perform; its last production, “Over My Dead Body” was cut short three weeks from production in March 2020 due to COVID-19.

Director Christine Schaefer said “Take Ten” was specifically chosen with COVID in mind, so if an actor had to quarantine, just one of the 10-minute skits could be pulled without losing the whole show. 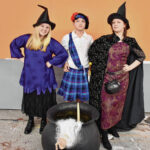 “The Weird Sisters” pose for a photo opportunity with Macbeth as part of “Take Ten,” a collection of 10-minute plays presented by KidsPlay this weekend. Pictured from left is Cailey Michalisko, Anthony Stunda and Madalyn Scullen.

While the Omricon variant over the holidays got the production off to a rough start, four weeks of Zoom rehearsals followed by in-person practice starting in late February has the cast ready to take the stage.

Included in the plays is “The Boys at IHOP,” where Dracula and the Wolfman meet during the wee hours of the morning to discuss their bad luck in finding victims.

“Heads Up” portrays two bird watchers horrified when a third bird watcher shows up without his head.

“Macbeth Mixed Up” portrays a search for a third witch to curse Macbeth, but instead of another wicked witch from the Rent-a-Witch Services, Gwenda the Good shows up.

A lesson in art is portrayed in “Timothy Meyer’s Vomit,” and school curriculum gets a jab in “8 X 4 = China.”

H.J. Ricks Centre for the Arts is located at 122 W. Main St., Greenfield. For more, visit KidsPlay on Facebook or email KidsPlayInc.me.com.