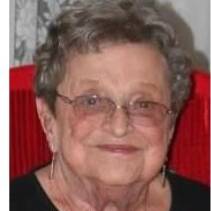 She was a member of the Morristown United Methodist Church, where she was active in Feed My Lambs, a food bagging project for school children in need.

Wilma was a homemaker and helped on the family dairy farm, Zike Jersey Farm. She had formerly worked at International Harvester.

Wilma loved to shop. Carrying on the family Christmas tradition of having oyster stew and chili for Christmas Eve was very important to her.

Visitation will be from 10 to Noon on Saturday, January 29, 2022, at Freeman Family Funeral Homes and Crematory, Frazier Chapel, 124 E. North St. in Morristown.

Funeral services will be Noon on Saturday at the funeral home.

Interment will be at Hanover Cemetery in Shelby County.

Memorial contributions may be made to the Morristown United Methodist Church, for the Feed My Lambs Program, 221 S. Washington St., Morristown, Indiana 46161.

Online condolences may be shared with Wilma’s family at www.freemanfamilyfuneralhomes.com.