So when it came time for a Greenfield florist to start thinking about the next chapter of her life and handing off her business, she quickly thought of the funeral home she’s been working so closely with over the years.

But it was more than just the similarities of the services they provide that drew the connection; it was their business philosophies too. The deal between the two longstanding businesses is allowing the funeral home to expand its services while giving the floral operation the room it needs to grow.

Stillinger Family Funeral Home has acquired Penny’s Florist and is moving it into the former Jim Dandy Family Restaurant location at 800 W. McKenzie Road, Greenfield. The funeral home is leasing the property from local restaurateur Costas Stylianou, who bought it after Jim Dandy’s ownership announced in October it wouldn’t be reopening the Greenfield location after what was initially planned to be a temporary closure that started in December 2020. 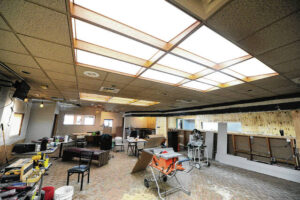 The dining room area in the former restaurant will become display space for floral arrangements and home decor items.

David Stillinger, owner of Stillinger Family Funeral Home, said his business has had close ties with Penny’s Florist over the 20 years the funeral home has been in operation.

“We’ve always treated each other like family,” he said.

He recalled Denna Gundrum, owner of Penny’s Florist, approaching him about a year ago to talk about her future.

“We all agreed we had like minds when it came to running a business and a successful business,” Stillinger said. “I’m not a florist, but you kind of have the same ideals on operating procedures and things like that. It’s all just worked out well.”

Gundrum owned the floral shop for nearly 30 years; her mother is the business’s namesake.

“The timing was just right,” Gundrum said. “We were ready. We were growing exponentially, and we were ready to make a few changes.”

Her parents started the business 50 years ago this upcoming spring.

She agreed the two businesses have similar outlooks.

Stillinger is keeping all of the Penny’s staff, and Gundrum is staying on as manager for a year.

“She’s got a great cross section of people from Hancock County,” Stillinger said. “I’m really thrilled they’re all excited about staying on board and seeing where we can go with it.”

Gundrum looks forward to spending more time with family after helping with the transition.

“In the future Mom and I will be moving down south to Florida to be closer to my daughter and grandchildren and just enjoy a new chapter in our lives and enjoy some nice, sunny weather with family,” she said.

The former restaurant has been undergoing renovations, and Stillinger hopes to open in mid- to late January 2022.

“We’ve basically been re-imagining what we can do with the building, and we’re still using the majority of the actual eating space for the display area for the flowers,” he said. “So it really enlarges the capacity to show more of the flowers and the home decor.”

Stillinger will also add monument sales to the location’s services.

“So it’s a place where people can come and shop for a lot of different things that are somewhat related,” he said.

Gundrum is excited to move from the current Penny’s location at 1311 W. Main St., Greenfield.

“That’s the best part of the whole thing,” she said. “We’ve kind of outgrown our location. We are 10 designers strong and just needed a lot more space to serve our community and continue to grow the way we’ve been growing. The renovations going on there are going to be pretty fabulous.”

Stillinger is having a new logo designed for the business but is keeping the namesake; it will be called Penny’s Florist Home Decor and Monuments by Stillinger.

Gundrum said no permanent decisions have yet been made on the future of her Main Street location but that plans are in the works.

Morton Marcus: GDP in the time of COVID