NEW PALESTINE — Sitting up on the stage in Indianapolis telling education officials about all the positive things that come with getting an education in a rural community, Braeden Baker couldn’t help but smile.

“I like the fact that our high school is in a small town where on Friday nights we know most everyone is going to show up at our football game to support our school,” Braeden said. 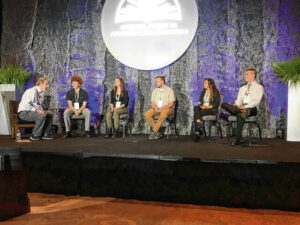 Braeden Baker, New Palestine High School senior, seated at far right, was one of a handful of students in Indiana asked to attend a national convention on rural education in Indianapolis last week.

Braeden, a New Palestine High School senior, was asked to take part in the 2021 convention and research symposium for the National Forum to Advance Rural Education held last week in downtown Indianapolis.

This year’s event theme was Raising Rural: A Fair Chance for a Good Life. The convention broached such questions as: Can rural living be more economically and environmentally sustainable? How can rural learning be more relevant and valuable personally, locally, and globally? How can rural places be more inclusive and less divisive when they address racial, ethnic, class and gender equity issues?

“It’s probably one of the neatest things I’ve done so far as a senior,” Braeden said. “It made me feel good that I could represent our school and learn about other schools as well.”

Braeden and a handful of students from two other small schools in the state, Sheridan and Greensburg high schools, were asked to represent the student body at the national convention.

“I was part of the student panel, where they get opinions from students,” Braeden said. “We all just talked about the advantages we have over larger schools.”

Braeden was also pleased to learn from the other small-school representatives, such as teachers, administrators and superintendents, that rural schools are the center of their communities and don’t get lost in the atmosphere of a bigger community.

“We all pretty much discovered we have great commitment from our teachers and lots of opportunities considering we’re small schools,” Braeden said.

Braeden, the co-president of the student council, was asked to participate by NPHS assistant principal Nick Mitchaner, who explained to Braeden the program offers grants to rural schools and asked him if he’d like to share information on what it’s like to attend NPHS.

“We are part of the Rural Early College Network, which is a network of high schools around the state that have early college programs in more rural areas,” Mitchaner said.

The grant they get for being in the program lasts over several years. The district received $50,000 last year, $40,000 this year, and will receive $30,000 next year to help advance and grow their early-college program.

“This includes helping teachers get credentialed, funding professional development opportunities, such as this conference, marketing our early-college program and other various early-college expenses to help expand our offerings,” Mitchaner said.

Mitchaner said Braeden was a good candidate to attend the conference because he is an outstanding student and is heavily involved in school activities.

“He did a wonderful job, and this was such a neat learning experience for him,” Mitchaner said.

Braeden plans to attend IUPUI and major in political science and have a career as a lobbyist in state government, where he can continue to support rural communities and smaller high schools. Attending the conference also gave him a chance to network and meet educators and students from around the state and nation.

“All the students who were at the conference, we started a group chat this weekend talking about all kinds of stuff,” Braeden said. “It’s great to get to know other people.”