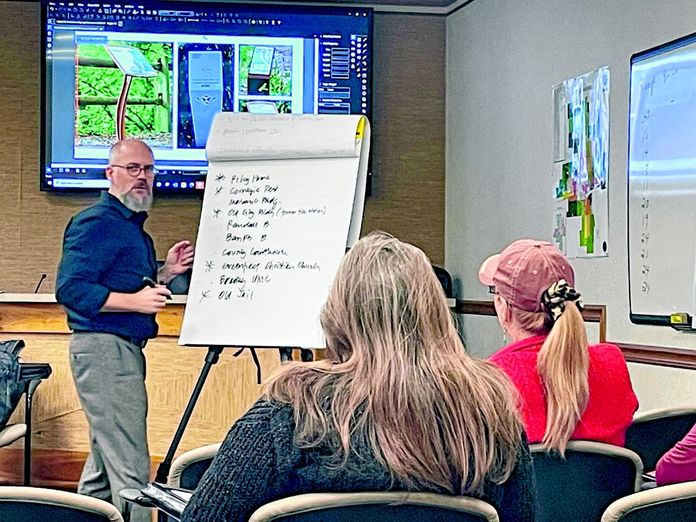 GREENFIELD — Historical markers, poetry etched in concrete and benches shaped like the ABCs were among the many ideas discussed at a planning session for the Riley Literary Trail on Monday at Greenfield City Hall.

Construction of the proposed $2.7 million trail is expected to begin and hopefully end in 2023, after two years of engineering and design work, bringing a long-awaited feature to the downtown Greenfield area.

OVERSET FOLLOWS:The 0.7-mile loop through the city’s historic district will create a walking trail complete with focal points that celebrate Greenfield’s history through literature and art.

About 20 community leaders and a few residents gathered at Monday’s public session to brainstorm what some of those focal points might look like.

Miriam Rolles, who owns a mid-19th century cottage along the proposed route, suggested the trail take on the same type of informative feel as the Freedom Trail in Boston, which celebrates that city’s rich Revolutionary War history.

While Greenfield can’t showcase the American Revolution it has plenty of stories of its own to tell, she said.

“I’m really excited about the trail. I think it’s really going to add a lot to our community,” said Rolles, who thinks the trail can boost tourism and educate residents about the place they call home.

Greenfield city planner Joanie Fitzwater said the trail is intended to “tell Greenfield’s story,” from highlighting its history to showcasing the literary, artistic and other talent that came from this area.

While the Riley Literary Trail is named in honor of Greenfield native James Whitcomb Riley, not all of the literature featured would pertain to him, she said.

Nor would the trail focus solely on literature, but rather be a tribute to the overall culture of Greenfield.

Fitzwater said it was “really good to move out of the engineering phase and move on to more of the aesthetic design phase” at Monday’s meeting, when one of the many items up for discussion was how to best manage the ongoing installation and maintenance of the trail and its many points of interest.

“We need to establish guidelines which we’ll rely on for future installations,” she said.

Fitzwater said the next step would be to establish focus groups to look at exactly what kinds of art, literature and history to include along the trail. The group also needs to determine exactly what agency will be tasked with maintaining the trail and overseeing future installations.

Establishing a lead organization is part of a broader effort to establish an all-encompassing art governance agency for the downtown Greenfield area, said Fitzwater, a necessary step toward one day becoming a designated arts district.

The trail is being funded by a $1.6 million transportation grant from the Indianapolis Metropolitan Planning Organization, which plans and programs federal transportation funds. City engineer Jason Koch, who Fitzwater said has extensive knowledge in trail design, won the grant in 2018.

The balance of the funds come from a local $1.1 million match out of the funding the city pledged as part of the multi-million dollar Stellar Communities award it received in 2018 from the Indiana Office of Community and Rural Affairs, in partnership with the town of Fortville and Hancock County.

Since the current trail budget only includes design guidelines for future interpretive and art installations, Fitzwater said the city will be seeking grants and inviting community groups and businesses to partner on the addition of future art, literature and historic marker designs.

Lochmueller Group and Ratio Design Landscape Architects are guiding the community design on the trail, which will take visitors throughout the downtown area in a path linking the Pennsy Trail, Riley Avenue, North Street and American Legion Place.